Language of Confusion: Bureau of Investigation


I couldn’t resist that one : ). But I do find it interesting that the word for where you put your clothes is the same as the one for an agency or department. They aren’t pronounced differently, but the context rarely, if ever, won’t tell you which one you’re reading about. Unless it’s something like this: 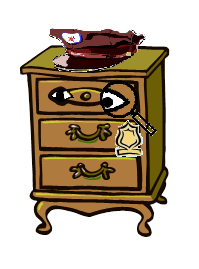 But I suppose that’s a long shot. Anyway, what is up with the symmetry of two vastly different words? Yes, I am going to answer that.
As the eau ending indicates, bureau (dresser) is of French extraction. In the late seventeenth century, the French took the word for “cloth covering for a desk” and decided it meant desk or office (hmmm…will that be important later?). Bureau comes from the Old French burel, course wooden cloth (burlap), which is a diminutive of bure, dark brown cloth. Bure is Latin in origin, probably from the Lower Latin burra, a wooly garment.
The second definition comes right from the first : ). Bureau is short bureaucracy, which is taken directly from the desks commonly used in those offices. About thirty years after bureau showed up (which was in 1690), bureaucratie showed up (I guess it’s like saying desk-worker). Credit to the invention of the word is given to Jean Claude Marie Vincent de Gournay, a French economist in the early eighteenth century. If you want to learn more about him, go to his Facebook page. Seriously.
Thanks as always to the Online Etymology Dictionary. I could read it all day.
Man, I’m such a nerd.
Posted by J E Oneil at 5:43 PM