The Orangus Pestifloofus likes to make her home in soft, warm places, especially brand new quilts people got for their birthday.
Posted by J E Oneil at 4:00 AM 3 comments: 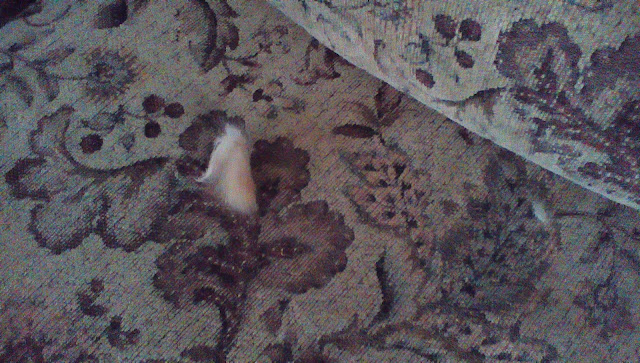 And now we see the spore of the Orangus Pestifloofus, which reproduces by shooting clumps of fur off of her body and onto furniture and rugs.
Posted by J E Oneil at 4:00 AM 3 comments: 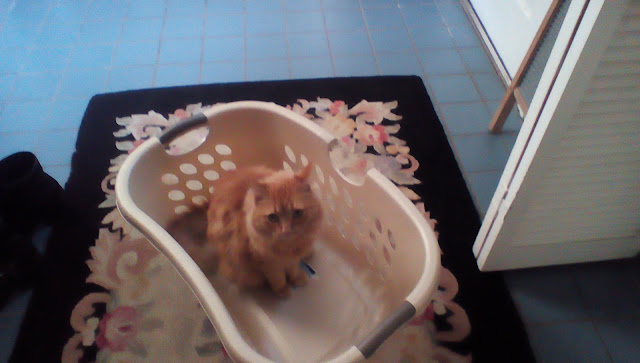 And now we see the rare Orangus Pestifloofus in her natural habitat: sitting on or in something you want to use.
Posted by J E Oneil at 4:00 AM 6 comments: 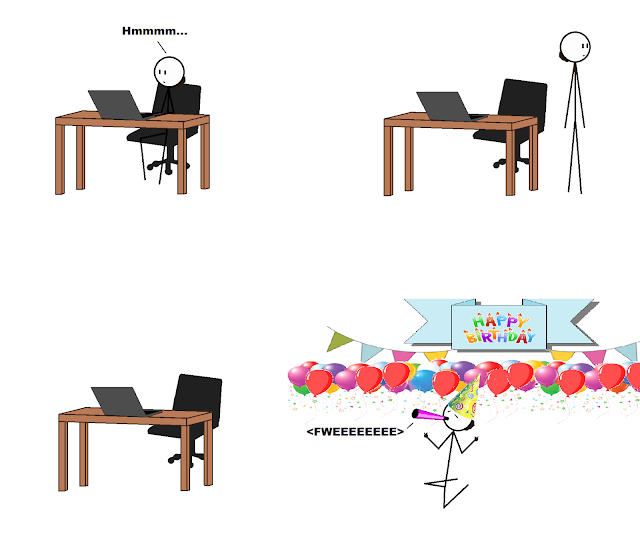 WHOOO! I’ll be taking a blogging break next week! Like, a complete break instead of putting up filler, because I just want to relax and do nothing. Go celebrate my birthday by sending me cake!
Posted by J E Oneil at 4:00 AM 6 comments:

Hey, I did quiet. Might as well do the opposite.

…I didn’t have any other ideas.

Loud showed up in Middle English first, coming from the Old English hlud, which meant something that made noise (like aloud), and was indeed pronounced with the H. It comes from the Proto Germanic hludaz, heard, from the Proto Indo European klutos-, from kleu-, to hear. So we got rid of the K and started pronouncing it with an H, but that was too much for us so we got rid of that, too.

Noise showed up in the thirteenth century, but at first it meant either a noise of any kind or the sound of a musical instrument. It took it until the mid thirteenth century before it started meaning loudness or clamor. It comes from the Old French noise, which means din or uproar, as well as things like disturbance and brawl. Some people think it might be from the classical Latin nausea (which means, you know, nausea), and others think it might be from noxia, toxic, but those aren’t totally accepted theories. Weirdly enough, the word noisome isn’t related to noise. It’s actually from annoy.

Next we’re looking at din, which isn’t a word we hear much these days because it was actually overtaken by noise. It comes from the Old English dyne, din, which is related to the verb dynian, to make a noise, and I’m kind of disappointed that we don’t have that word any more. We can only say “to make a noise”, not have a single neat verb for it. Anyway! It comes from the Proto Germanic duniz, from the Proto Indo European dwen-, to make noise. Why didn’t we keep that verb?!

Let’s see, what else can we look at? Raucous is fairly recent, having an actual year to date its appearance: 1769. It comes from the classical Latin raucus, which means hoarse, from the Proto Indo European base reu-, to make hoarse cries (but not horse cries). Reu- is an echoic word, meaning it sounds like what it means. So because hoarse noises sound like “reu” I guess, that gives us raucous, because hoarse noises are raucous? I don’t know. I’m too tired to figure this one out.

Okay, that was stupid. I apologize.

Are you going to tell me what the special thing I’ve been given is? It better not be some indefinable crap like “feeling your body” either. I accept material gifts only.

Now Greg is getting spam from “Numbers”. 3 would like to discuss a business deal with him, while 9 is suffering from cancer and really needs to do something with their inheritance.

Cancer widow! She doesn’t say she has cancer, but she is trying to fulfill her “last wish”, so she is dying. It’s probably cancer. I mean, it’s always cancer.

Lashaunda??? I hate being the kind of jerk that makes fun of a name, but Lashaunda????!!!!

I don’t trust them, for good reason. 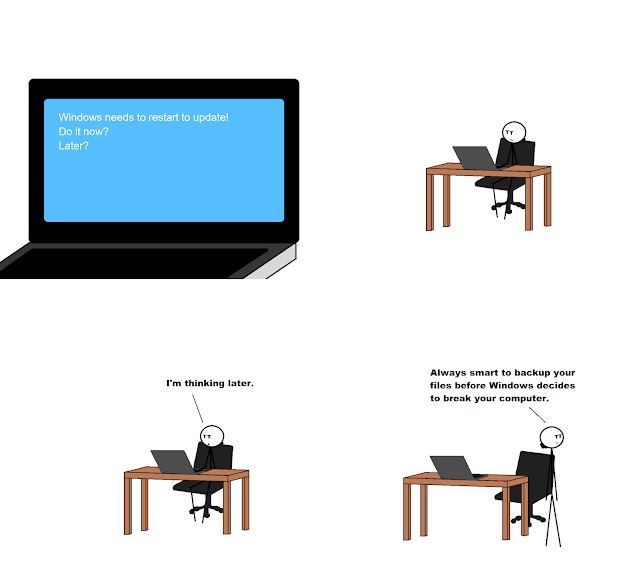 Each update slowly unmakes my laptop.
Posted by J E Oneil at 4:00 AM 5 comments:

And now for quiet words, because I like things quiet.

Quiet showed up in the fourteenth century, from the Old French quiete and classical Latin quies, rest, and its verb form quietare, to lull. Further back, it’s the Proto Indo European kweie-, to rest or be quiet. It’s remained remarkably consistent through the millennia!

Hush appeared in the mid sixteenth century, a variant on the Middle English huisht, and is thought to be imitative—in other words, the sound when people hush you sounds like hush, so it became a word. Shush is the same way, except it only appeared in 1921. Going “shhh!” to someone is older, having started in 1847, and shush comes from that. There’s no evidence that hush had any influence on it, but that wouldn’t surprise me.

Finally today, mute. It showed up in the late fourteenth century from the Old French muet, which is actually a diminutive form of mut/mo. Before that, it was the classical Latin mutus, which basically means speechless. It’s possibly from another imitative word, meue-. You might be asking how that’s initiative. Well, what sound do you make when you can’t open your mouth?

It’s back! I know you’re excited. 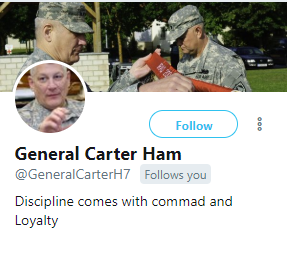 Look at this totally not suspicious new follower. I especially love how they don’t even spell “command” right.

You leave my rooster out of this.

It’s very enthusiastic about my unsubscribing.

…Yes or no to what? The sexy love? I think I need an adult

The gorgeous singies are everywhere! Call an exterminator!

You can tell it’s really from FedEx because they have the copyright symbol after their name. Only the real, legitimate business would have that!
Posted by J E Oneil at 4:00 AM 6 comments:

Of Course It Did

Of all the times… 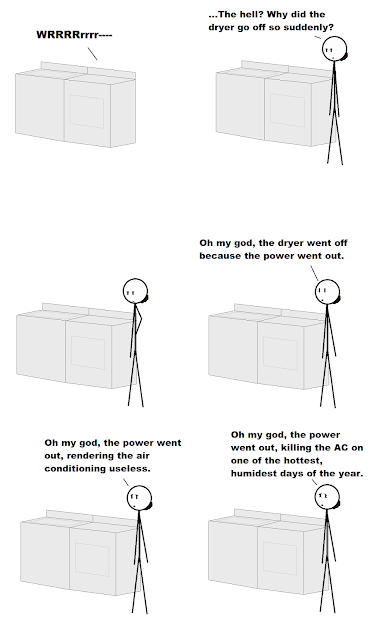 Thankfully, it didn’t last long this time. It’s just that in the past, it’s taken days for them to fix the power, and that’s not a good thing in the middle of summer. Or winter, knock on wood that doesn’t happen again.
Posted by J E Oneil at 4:00 AM 6 comments:

Yeah, I’m doing this. Consider it inspired by last week’s revelation about where “hawk” comes from. Also me really not having any ideas. This week, we’ll be looking at song birds. I’m sure other types of birds will follow on later occasions.

Cardinal
Cardinals were named after cardinals in the seventeenth century—they were named cardinals as in the cardinals of Rome, who wore red robes. Pretty simple explanation there. But the word itself first came to English in the early twelfth century, from the Medieval Latin cardinalis, short for cardinalis ecclesiae Romanae—the chief cardinals of Rome. The cardinal part is what means chief or principal, and it’s also what “cardinal numbers” comes from, because they are the “principal numbers” that ordinal numbers depend on (as in, you can’t have the concept of first without the concept of one).

Sparrow
Sparrow used to be spearwa in Old English, coming from the Proto Germanic sparwan and Proto Indo European spor-wo-. The root word of that is sper-, which actually used to form the names of other small birds. Um, but not in English. Other Indo European languages.

Wren
Wren comes from the Old English wrenna, which is actually a mix-up of the Proto Germanic word werna. No one knows where that one actually came from. Maybe they didn’t have a name for them back then.

Finch
Finch comes from the Old English finc, which means finch and was also pronounced finch. It’s from the Proto Germanic finkiz, and like wren doesn’t have an origin before that, although some think it may have been named for the note the bird makes when it chirps.

Swallow
Swallow. Like the bird. Not like what you do with your throat. Are they related? Nope. The bird comes from the Old English swealwe, while to swallow comes from swelgan. Before it was swealwe, it was the Proto Germanic swalwon, from the Proto Indo European swol-wi-. Basically, swallow and swallow were spelled and pronounced differently until they got to Modern English. Great job screwing that one up and forcing us to deal with a lot of annoying puns, guys.

Whoo! It’s August! The one month of the year I actually look forward to! My birthday is less than a month away!!!! Aaaaaaa!

And now, goals or something.

July Goals
1. Edit one of the many projects I have in the works. Also start planning for the story I want to write this year.
Yeah, I did this. I also didn’t just plan the story. I kind of wrote it. Twenty thousand words. Not bad.

2. Work on edits from the beta notes I should be getting.
I did another read-through of the WIP and fixed quite a few embarrassing mistakes. It looks good, but of course, I still need more opinions.

3. Do some posts in advance to get ready for my blogging break next month. That’s right, I plan ahead.
Hey, I did this, too. What do you know.

In all, a successful month. I mean, in terms of writing. I think the reason I’ve been writing so much is because I so much want to shut out the rest of the world.

August Goals
1. Work on planning the sequel to the WIP. I didn’t expect to do this already, but everything’s been going so well on it, that I’m actually getting to the point where it’s ready to be written.

2. Keep editing. Can’t get distracted by the shiny prospect of first draft writing.

I’m a pretty picky eater. I do not enjoy trying new things, like at a family get together. 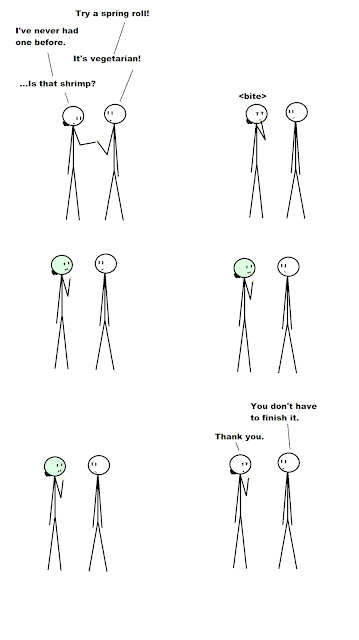 Seriously, they’re telling me it’s vegetarian and I’m pretty sure I spot shrimp (ugh!) in there. Even besides that, it was not a pleasant experience. Spring rolls are going on the exceedingly long list of foods I will never, ever eat.
Posted by J E Oneil at 4:00 AM 6 comments:

Language of Confusion: Whatever The Case May Be, Part IX

Honestly, at this point, I’d be disappointed if you don’t remember that the word case (like a container) comes from the Proto Indo European kap-, to hold/grasp,. It’s led to some… weird descendants.

I suppose it’s not totally crazy that heavy comes from kap-, since after all, you determine something is heavy by holding it. It comes to us from the Old English hefig, heavy, and that g is actually representative of a y sound, so pronunciation-wise it wasn’t all that different. It comes from the Proto Germanic hafiga, having weight, and that’s from kap-. I guess we can judge this one as a reasonable origin.

Heave being related also kind of makes sense. It’s from the Old English hebban, lift or heave, from the Proto Germanic hafjan, and that is also from kap-. Heft is from the same place; it just has a past tense in the same sense of thieve/theft.

How about we get into something weirder? Like hawk. As in the bird. It showed up in the fourteenth century as hauk (even earlier as havek), from the Old English heafoc, which is just hawk. It’s from the Proto Germanic habukaz, which is from kap-, although there’s no real explanation as to why a bird is named for grasping. I guess they’re really good at grabbing stuff. Oh, and hawk, like hawking goods is not related at all. Totally different origin. Words!

Now for the last word we’re looking at… purchase. Yep. It showed up in the fourteenth century from the Anglo French purchaser, which is from the Old French porchaicier. That word has the prefix pur- (might be intensive here, or meaning forth), and the chacier means chase. Which we looked at last week and basically means to hunt, and hunting results in taking hold of something—or grasping it. You chase after a purchase, I suppose.

That’s it. We’re finally done! And… now I have to start coming up with new subjects again.