Review: HER BONES ARE IN THE BADLANDS

Here I am reviewing a book today because it’s fun and it’s for Roland after all. Yes, he really does have another book coming out, which honestly makes me wonder if he’s some sort of cyborg designed for typing, but it also means there’s a new story to read so yay. It’s called, if you somehow missed the title of this page, HER BONES ARE IN THE BADLANDS and it’s another entry in his Samuel McCord series. 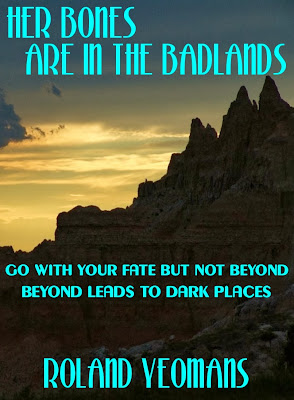 HER BONES ARE IN THE BADLANDS

The description, as per Amazon: “Something has awakened in the Badlands. Undying hunger and hatred for Man seethe in the darkness. While below the brooding pinnacles, the first talking Western is being filmed.”

Cons:
While atmospheric, the first four chapters seemed very much to only exist to introduce figures in the story.
A bit repetitive with words and phrases at time.
There were times that I thought the conversations went on too long, especially in tense situations.

Pros:
That title is very striking. Seriously, it’s evocative and absolutely perfect for the story.
The beginning felt a bit like telling, but it was also quite good at creating atmosphere for what I was reading. Roland really does a good job of setting the scene and immersing the reader.
Very good voice. It was very easy to imagine McCord simply by the way he speaks in the story. That’s how you know you’ve got a strong voice.

It’s a supernatural story with a western flavor and I would say it’s very worth your time to read. McCord is the ultimate self-sacrificing hero, to the point where I wished the guy would cut himself a break. But he won’t because when the nasties are out there, he won’t let anyone else put themselves in danger. And believe me, there are unpleasant things lurking in the badlands.

My ranking: four out of five skulls (Halloween is approaching, after all).
Posted by J E Oneil at 4:00 AM

Email ThisBlogThis!Share to TwitterShare to FacebookShare to Pinterest
Labels: book reviews, books, HER BONES ARE IN THE BADLANDS, Roland Yeomans