It’s spam day! Since I’m not doing regular posts next week, maybe I’ll do some spam posts? Best of the spam I’ve gotten over the years. Yes, that sounds easy like something people would enjoy.

Did she get tossed in a pit of acid? Because I imagine that would melt a lot of fat away.

This one seems very unsure of itself. I suppose having all those question marks helps with liability. Also, the quotes around ‘free’ there. Because we all know it isn’t free.

Is the unusual activity putting spaces in between each letter of Google? Because I do find that suspicious. 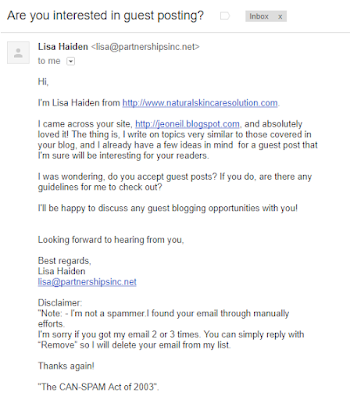 They were so close to sounding like a real human, and then they ruined it with that “Disclaimer: Note:” and claiming to have found my email through “manually” efforts. Also the fact that they say they’re not a spammer is a huge red flag. No idea why they’re mentioning “The CAN-SPAM Act of 2003” either.
Posted by J E Oneil at 4:00 AM