It’s time for the WIP It Goodblogfest hosted by DL Hammond and Elise Fallson, which means it’s a special Friday post. 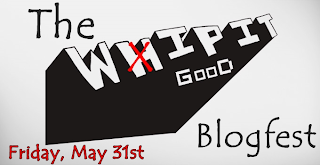 Hi everyone from the bloghop! If you’re looking to swap beta reads/critiques and don’t detest first person present tense, I’m here.
WIP Title: COLLAPSE
Word Count (projected/actual so far): 90,000/90,000
Genre: YA Dystopian/apocalyptic
How long have you been working on it?: A little over a year.
Elevator Pitch (if you came across an agent in an elevator ride, what couple of lines would you use to summarize your book): The world is ending. Society is crumbling. Cassidy, however, isn’t going anywhere any time soon.
Brief Synopsis (250 words or less): World temperatures are sky-rocketing and society is on shaky last legs. Cassidy is witnessing it all firsthand. But she isn’t the type to let a little thing like the end of the world do her in. Of course, the life she once knew is gone, replaced with something vastly different from high school and a boring suburban life. Bullies used to be a problem for her. Now she’s slightly more worried about being gunned down by people she once called “neighbor”, and whether or not her brother will die from an asthma attack because they can’t get to a doctor. Her father says keeping the family safe at the expense of everyone else is the right thing to do and she believes him…except for the one niggle of doubt when she sees the people gasping their last breaths in triple digit temperatures. It may be a question of who breaks first, her or the heat.
Are you looking for a Critique Partner?: Yes!
Are you looking for a Beta Reader?: Also yes!
Posted by J E Oneil at 4:00 AM