If you’re new to this whole thing, the Spamfiles is my sideblog on Tumblr where I collect all the insane, ridiculous spam I receive in my email. You might call it clutter. I call it comedy gold.

There’s a reason I don’t do comedy.

A patch for PE. I wish they had those when I was in school. I hated gym class. 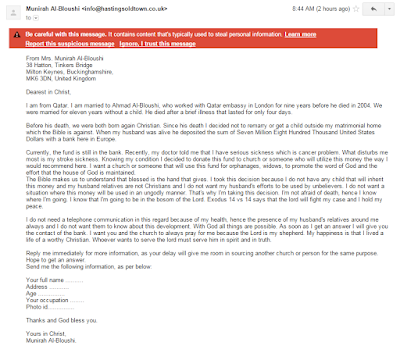 Okay, this. I can’t imagine the person who would believe that some woman wants to give away all her money to some random person she emailed over the internet. Who would believe that’s a thing? (Which just makes me think that there must be someone who falls for it, otherwise I wouldn’t be getting so many of these…) 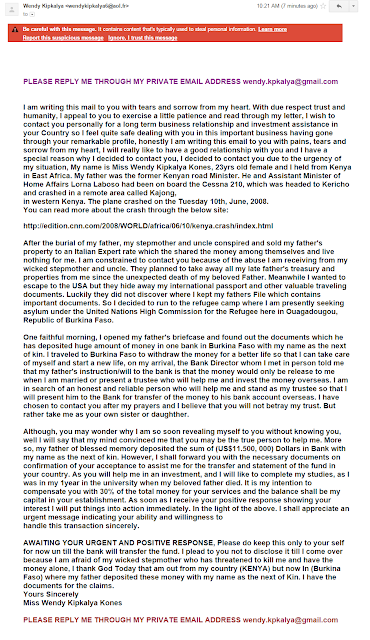 A popular variation of the above is the daughter left unable to access her money after the death of her parents, usually because of the interference of an evil relative, although that’s not the case here. Instead this woman, who links to an article about a real event as if that’s proof, just can’t get access to her father’s bank account even though she’s his next of kin. My favorite part is that she’s gone through my “remarkable profile” and writing me with “pains, tears and sorrow”.

I keep getting emails from this Doctor Maxman, but I’m beginning to think that he isn’t a real doctor.

Finally, I’d like to share with you something that popped up when I was watching TV on my laptop (it’s actually my old lap top, too…sigh…I still miss you!). Anyway, my email account has been temporary suspended due to infections on my computer, which I just love. I wonder who would answer if I called that number and if they’d be surprised that I didn’t just close out the pop up and ignore it because my email is obviously fine.


Okay, I’m all spammed out for now. Anyone else have any amusing spam stories to share?
Posted by J E Oneil at 4:00 AM