A little while ago, Gwengave me the Daisy award, which sounded like a lot of fun. 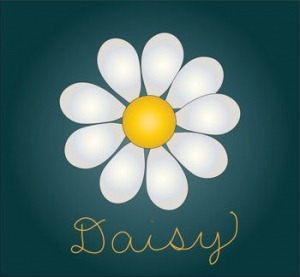 As usual, I’m supposed to thank the giver, so thanks Gwen : ). How nice of you to think of me…coming up with seven weird things about myself, which is the second part of the award rules. So here we go:
Seven Weird Things About Me
1.  I can’t stand the feel of certain fabrics, like velvet. To me, squeaking chalk on a blackboard sounds like velvet feels. Is that weird? Well, I guess that’s the point.
2.  I might not be able to recognize actors by sight, but 26 years of cartoon watching has allowed me to recognize them by voice.
3.  Sometimes I slip quotes from TV shows into conversations just to see if anyone notices. I do it in posts, too. Just so you know.
4.  I don’t drink alcohol. It’s not that I’m against it—go ahead and get smashed if you want, it’s not my business—it just all tastes the same to me: gross. I’m also not thrilled with pork products (something I have in common with Gwen), most forms of cheese, and egg yolks (the whites are fine).
5.  When I feel restless or tense, I almost always file my nails. It makes me feel like I’m doing something even when I’m not.
6.  I check my shoes for spiders before I put them on. Although I don’t think this is weird as much as it is prudent. I’ve found spiders in there before.
7.  I have no problem eating most vegetables as long as they’re not cooked. Raw, fresh broccoli? Love it. Steamed? Barf. Dipped in cheese? Gag.
Of course I have to pass it on to other bloggers, but I have a much lazier better idea: consider this award yours just for looking at it. I know they’re silly, but they’re fun too, so if you want a new award then please, reveal seven weird things about yourself : ).
Posted by J E Oneil at 12:00 AM

Email ThisBlogThis!Share to TwitterShare to FacebookShare to Pinterest
Labels: about me, awards, Daisy Award, weird facts