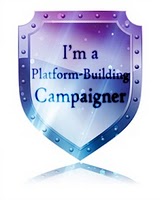 Oh, yes. I’m liking this. As always, Rach Harriehas set up a flash fiction challenge for us campaigners. These are the rules:
“Write a short story/flash fiction story in 200 words or less, excluding the title. It can be in any format, including a poem. Begin the story with the words, “The door swung open” These four words will be included in the word count.
If you want to give yourself an added challenge (optional), use the same beginning words and end with the words: "the door swung shut." (also included in the word count)
For those who want an even greater challenge, make your story 200 words EXACTLY!”
There's nothing I like better than a challenge. I was a little worried because the idea that came to me isn't totally made up on the spot. It's based off a brief memory of the main character in my WIP. Ember thought about what happened, but didn't go into detail.

The Night the Monsters Attacked
The door swung open, the creek of the hinges lost under the sound of our neighbors forcing their way into the shelter. I was shoved, kicked, almost fell under their feet. By people so blind with fear that they couldn’t see an eleven year old girl struggling to hang onto her three year old brother.
I can’t be mad at them. I didn’t want to die, either.
No matter how hard I tried, I never seemed to get closer to the shelter. I called to my Dad, begged him to help. But his hands were full, tugging Aura and Kay.
Behind me, there was a scream. Loud enough to be heard over the cries of the crowd. It was roughly cut off. And then came the wet tearing of flesh.
I stopped fighting the crowd and it pushed me in with it. I searched for my father, saw him with Aura. But not Kay. She lay outside on the ground, face browned with dirt except for the whites of her eyes. Someone stomped on her hand, looked down on her, kept running. She reached out, for dad, for me, for someone to save her.
And then, the door swung shut.
Posted by J E Oneil at 1:25 PM